Adhari park, a classic family night out, but don’t let the door hit you on the way out!

Now Adhari park may not be the most technologically advanced theme park around, but in our house it is still a firm favourite.

We started the fun in our evening, by when the boys started getting ready

for bed in their superhero jammie’s, we whisk them off into the car announcing that we were taking them to Adhari park! Then we continued building the excitement up for them, by turning the journey into a treasure hunt, pretending we don’t know where the park is and that they have to find it by looking out the window and having to shout and scream when they ‘find’ the amusement park. They love every second of it.

They’re too small for most of the rides inside the main park , although since we were last there a couple of years ago Thing one has grown and he gleefully told me that he at 120cms he was big enough for any ride- however mummy’s law prevailed and we stuck to the rides inside! 😉 The park itself has undergone some renovation work since we wet last there and now has a softplay and climbing wall as well as some other rides

being moved around. This rearrangement really works and keeps that magical element for the kids 🙂

With no passes available or offers on the credit you load into the cards, Adhari is by no means a cheap date, but to see the joy in Thing One’s and Two’s eyes as they span in the tea cups (although thing one span Thing Two so quickly his head swayed and I actually thought he might be sick!) and drove the bumper cars, it was TOTALLY worth it! 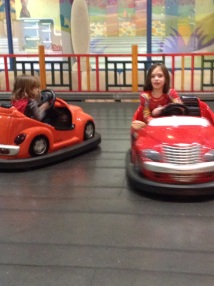 The staff were also so lovely and helpful too, when my youngest Thing Two couldn’t work out how to make his bumper car go, the ride attendants started him by pushing him around and he was in utter paradise, that lady turned what could have been a temper tantrum melt down into one of the highlights of his nights.

As it wasn’t too busy, when Thing 2 went in yet another car based ride (this time a one that bounced up and down) he managed to keep with his number 4 obsession (he sleeps with a number 4 cuddly toy-I kid you not) which was a total win for team bahrainib too 🙂

As in our house we are going through a super obsessive pirate stage, they absolutely loved the chance to play buccaneers in the little pirate ship and shrieked with an exhilarated joy every time it swung up high. 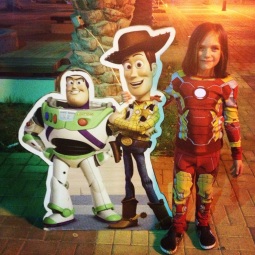 My favourite part was the simple addition of all the cut out cartoon characters, my boys went absolutely crazy over them.  They were so deliriously happy over the cut outs I think they may have enjoyed them more than the actual rides (even though they had lived them too!)

The ever popular superheroes- iron man, bat man and Spider-Man

And my youngest son sprinted between the madagasta penguin cut outs (a film we currently have to watch a couple times a day, screaming Adheli penguins and cuddling the characters-I blame his other love for this octonauts 🙂 )

We will definitely be back soon!!!